On several levels, humans depend on the functioning of complex systems, systems that consist of large numbers of individual elements connected according to a complicated pattern of interactions. Functioning examples of such systems are computers exchanging data on the Internet, cell signaling leading to the formation of biological organisms, or joint efforts in social groups. However, complex systems often also show failures, such as blackouts in power networks, jams in transport networks, the spreading of a disease, or cascades of extinctions in ecosystems.

My research aims at understanding how functionality and failure of network dynamics is tied to the underlying structure of a complex system. In particular, develop methods to identify key players and small structures in networks that play central roles as outbreak centers or as mediators of perturbations. Furthermore, I investigate strategies to optimize networks, for instance, strategies leading to networs in which failures affect only a small part of the whole system instead of causing a global disruption.

In particular, I enjoy not only developing new methods, but also putting them to the test in real-world systems. This is the reason, why I have worked, and will continue to work on a broad spectrum of applications, from technical ones in traffic control and power grids, over fire and infection spreading to biological applications in cell-signaling and ecological food webs.

I am convinced that in a world of networks that constantly grow in size and complexity, it is paramount to find methods identifying their core players and to find design principles that ensure their resilience against large-scale failures. This need for understanding is underlined by the increasing number of large-scale failures observed in systems optimized by humans, from black-outs in power grids, over pandemics of infectious diseases or computer viruses, to economic or financial crises spreading between interdependent companies. The insights of my research therefore present a starting point towards an understanding of the functioning or failure of the complex systems on which we humans depend.

My projects combine aspects and methods from physics, mathematics and biology. While most of my work is analytical, I use simulations (in C++ and python) to extend and test my results on large-scale networks.

Three fields of work are most prominent in my work.
First, I use methods and models from network/graph theory to characterize the network structure of the complex systems in question.

Second, to model the dynamics, I rely on traditional models for interactions, such as Holling-type responses, or I develop my own models for interdependencies. This allows to simulate the systems in question and to identify their crucial elements. In addition to this, I apply the novel method of Generalized Modelling to study a system's dynamics where universal knowledge about all interactions cannot be obtained.

Finally, to analyse the system's nonlinear dynamics, I use standard methods from bifurcation theory, in particular linear stability analysis. 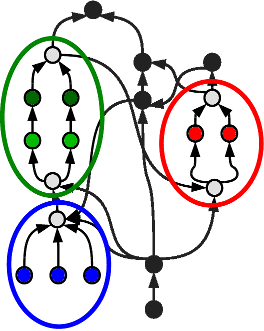 In this project we focused on ecological food webs as a standard example for complex systems with incredibly complex dynamics. The sheer diversity of biological life leads to complex networks of interactions. The relevant time scales range from hours in the microscopic world to decades and even centuries for long-lived macroscopic animals. Even in simplified models describing a food web, the network of who-eats-who, one typically finds a multitude of different dynamics and dynamical transitions, so-called bifurcations.

All the more surprising was the finding that the dynamics of different food webs can be characterized by identical bifurcation diagrams, when viewed from the right angle. In other words, they present an example of different dynamical systems exhibiting identical phase diagrams. The present paper provides an analytical explanation for this observation, showing that the symmetry between systems is caused by meso-scale symmetry in the system's structure. Under certain conditions, identifying such internal symmetries allows aggregating the system, such that a smaller system with identical dynamics is formed.

Beyond the importance for ecosystems research, this work provides an example for the importance of meso-scale structures in complex networks in general. 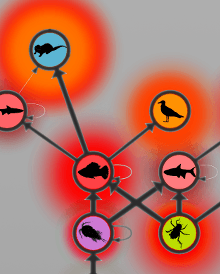 The goal of this project was to develop a method that identifies the key elements of a complexly interacting system. In particular, we aimed at an understanding of the sometimes devasting effects, following the invasion of an ecosystem by a new species.

The developed analytical method predicts the effects of perturbations using the framework of generalized models. Further it allows to analytically identify the most important parts in a system when making a prediction, i.e. those parts that are the most sensitive to perturbations elsewhere or the most influential when perturbed. These results are especially useful when gathering data. Focussing on these important  species  makes data gathering processes for a prediction much more effective, allowing thereby good predictions for much more complex systems than what was priorly possible.

In this ongoing project, I investigate the trade-off between stability and resilience of networks. With a special focus on infection spreading in social networks and failure spreading in power grids, I study the apparent size of failures that occur when these systems are undergoing a slow destabilization (slow-moving risk).

As this project is ongoing, feel free to contact me about it to discuss or get more details. 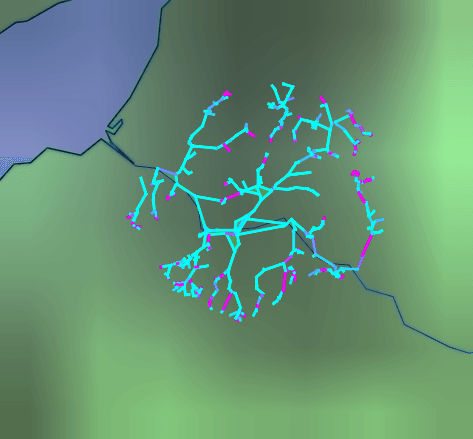 I will not detail them here because they are industry cooperations, hot topics of partner research groups or simply in too early a stage to make qualified statements. We can have a chat about them, though.